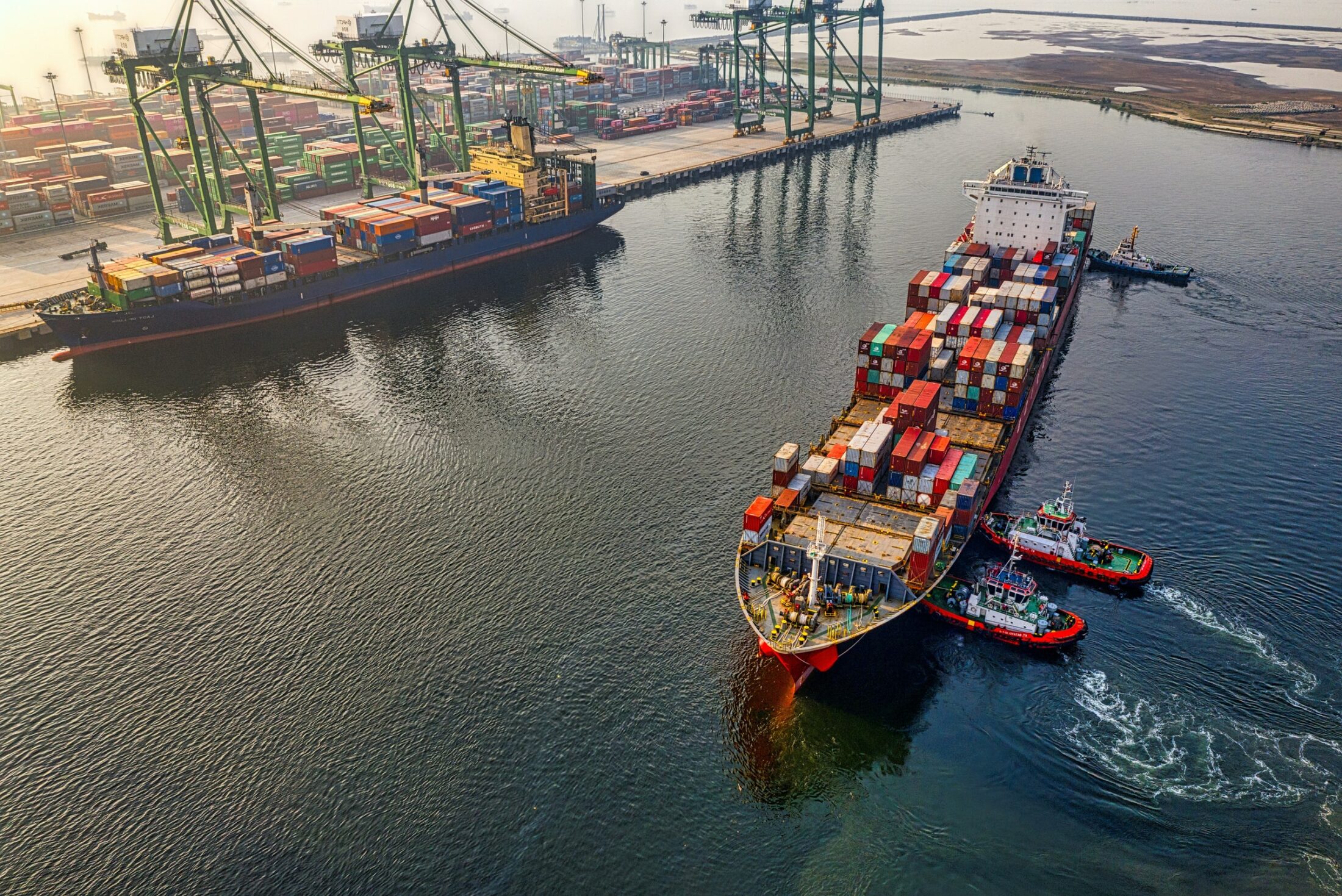 The COVID-19 pandemic brought increased attention to U.S. global supply chains, as the pandemic impacted critical components within U.S. manufacturing. The attention has led to calls to structure U.S. tax policy to encourage firms to expand their manufacturing capacity in the U.S., under the belief domestic supply chains are inherently less risky than global ones.

But the belief is mistaken, because global supply chains actually reduce risk, rather than increase it. One of the benefits of multinational activity is that it allows firms to minimize the risks of country-specific shocks.

For example, consider the U.S. meatpacking industry. In 2020, the U.S. produced about $123 billion worth of beef, and only 5.4 percent of U.S. beef consumption consisted of beef imported from Canada and Mexico, our largest trading partners in this market. Despite being a primarily domestic-based industry, U.S. meatpacking was significantly disrupted by the coronavirus. While the U.S. meatpacking industry may itself not have as complex a supply chain as other industries, the example illustrates that even industries that are largely U.S.-based are still highly susceptible to supply shocks.

From a portfolio investment perspective, cross-border investment allows firms and individuals to diversify their portfolios and obtain multiple methods of financing for projects. U.S. firms can receive foreign investment for risky projects, which exerts downward pressure on interest rates and reduces the need for increased domestic saving to finance investments. Similarly, U.S. firms and investors can reduce their exposure to U.S. economic risks by investing in other countries.

In some cases, however, U.S. firms operating in certain countries may have to face additional political risks. As one example, China has enacted much more draconian lockdowns throughout the pandemic than other countries, which affects U.S. multinationals operating there. Nonetheless, rather than orienting policy to encourage firms to “onshore” their activity, it would be prudent to encourage them (or at that very least, not discourage them from) expanding operations in other countries that carry fewer political risks. Indeed, many firms have already revealed plans to do so independent of any U.S. policy, reflecting ongoing concerns about increased regulatory risks in China. Continued engagement with trading partners in the Indo-Pacific region would also likely incentivize U.S. firms to move their operations to more stable countries.

Looking at trade data can help reveal how FDI adds value to the supply chain, also known as the global value chain (GVC). The Bureau of Economic Analysis’ new Trade in Value-Added dataset shows how GVCs add value to finished products that the U.S. exports. For example, if the U.S. exports a car valued at $25,000 to Canada, how much of the value was generated in U.S. versus in foreign jurisdictions? Some of the value is generated in the U.S. manufacturing industry, where the car is assembled, but producing a car requires sourcing and refining metals, which may be imported from foreigners.

Importantly, although this data captures how valuable foreign countries are to the U.S. supply chain, it actually understates the value U.S. firms contribute to products. Trade data only captures the tangible inputs into a final product, but a significant share of the value of U.S. output is generated by “intangibles,” such as the brand value and other forms of intellectual property (IP). Imports of IP services, measured in the following chart as charges for the use of IP abroad, has grown significantly over time, reaching $43 billion in 2020. Notably, IP imports related to research and development grew after the Tax Cuts and Jobs Act (TCJA) as companies were incentivized to move their IP out of low-tax jurisdictions. 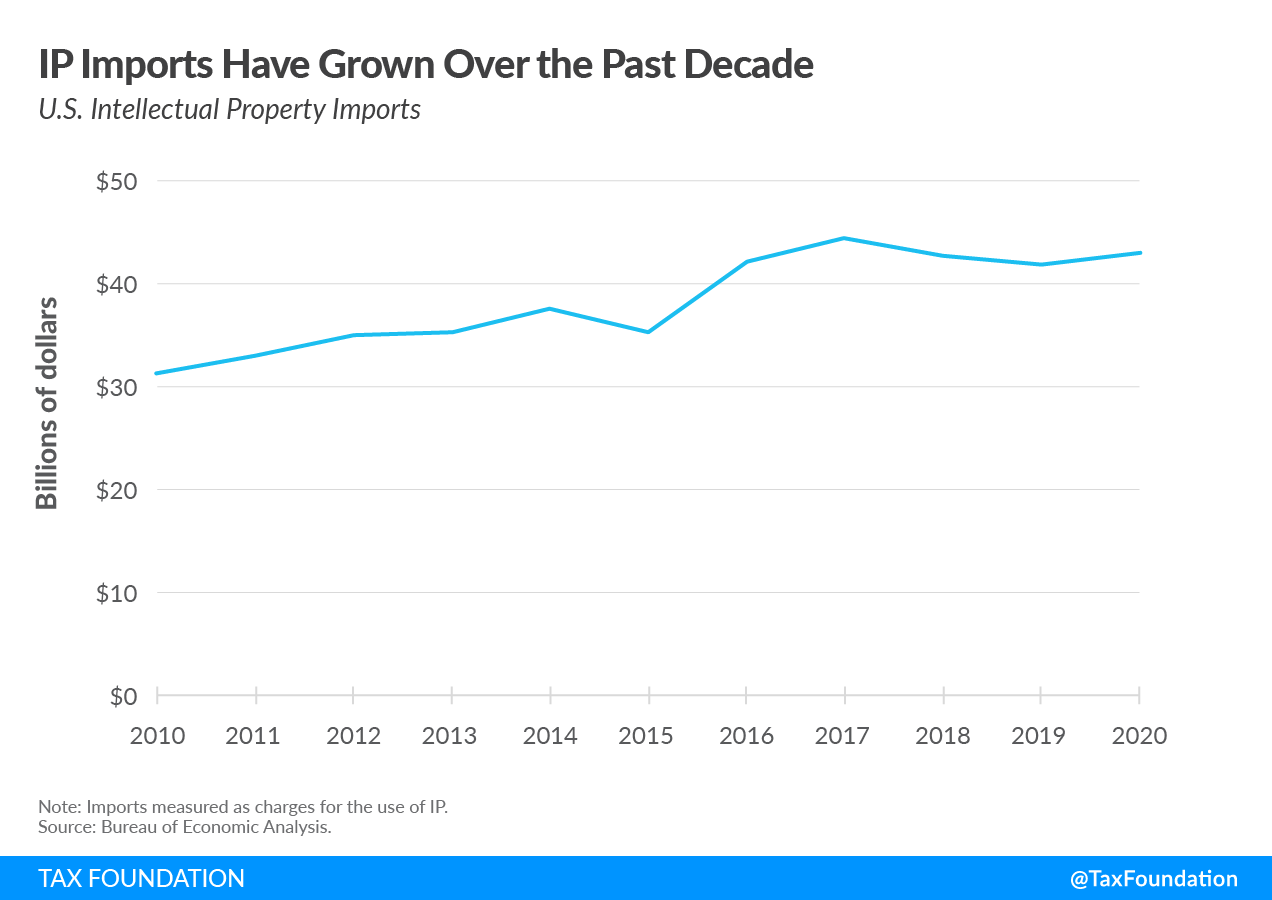 To illustrate the value of IP to the supply chain, let’s look at the Apple iPhone as one example. The direct inputs are produced in a variety of countries, assembled in China, and then sold in the U.S. The manufacturing and distribution costs account for slightly more than half of the retail price, implying a large profit margin for Apple; in the following example, roughly 45 percent. But the research and development that helped produce the iPhone, the establishment of a trained workforce that can assist users, and the ability to integrate the iPhone with other Apple products all add value to the iPhone and carry attendant costs.

As intangibles comprise a larger share of trade over time, accounting for its supply from U.S. parent companies to foreign affiliates could affect measured profits and as well value-added estimates by U.S. parent companies. One estimate from World Bank economists found that accounting for IP costs could lower the return on invested capital by as much as 29 percentage points for top firms. In the Apple iPhone example, this would reduce the profit margin to 16 percent.

Although the dispersion of our supply chains throughout the world has been scrutinized in recent years, both inbound and outbound FDI are critical to sustaining supply chain resiliency and reducing economic risks for both firms and investors. Policymakers should continue to ensure that firms have the ability to freely invest abroad.

Can Malpractice Settlements Be Taxable?

Push for Higher Taxes is Misguided Amid Inflation, Looming Recession

Self Employed: Living and Working Abroad? Here’s What You Need to Report to the IRS