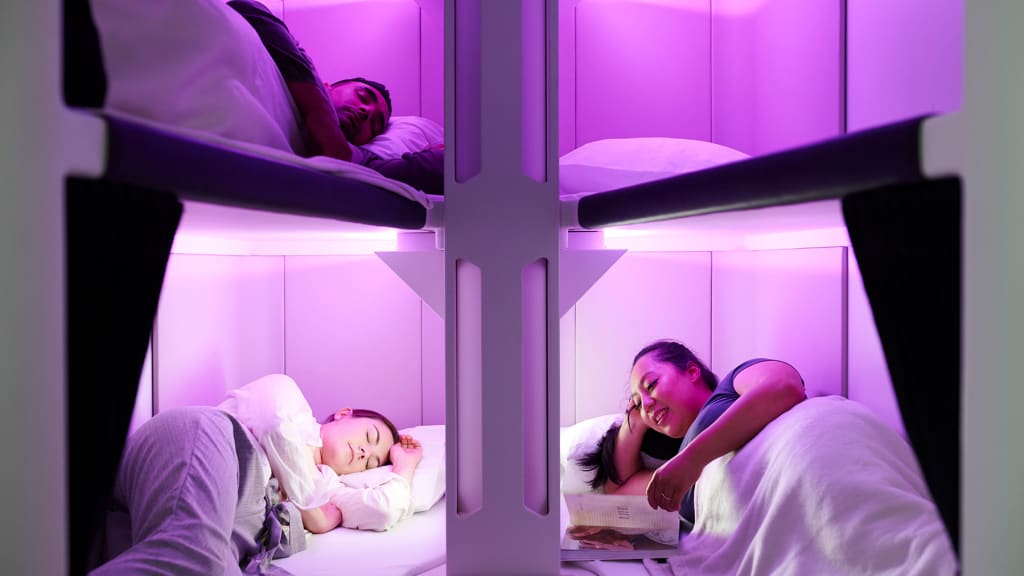 With Covid aftereffects still causing huge numbers of delays and cancellations at airports, there isn’t much good news about air travel at the moment. But I may have stumbled across a bright spot. One airline at least is saying it may soon make the dreams of exhausted long-haul travelers come true. Air New Zealand just announced plans to install actual beds in economy class on its ultra long-haul flights. Imagine if you could actually sleep well in economy class? As someone who regularly endures 20+ hour trips with a 7-year-old in tow, the idea of having an actual flat surface to stretch out on without having to shell out an arm and a leg for first class has been among my fondest wishes for years. I’m sure plenty of entrepreneurs who  travel long-haul for business share my daydreams of quality sleep in economy class.  Apparently, those dreams are about to come true. Air New Zealand is already known for its “couch” seats in economy, which allow a row of seats to flip up and make a flat surface for three passengers to share. Now the airline plans to up its comfort game further. The airline recently announced that it will launch upgraded 787-9 Dreamliners in 2024 featuring “Skynests” in economy. That’s fancy airline speak for bunk beds. The newly decked-out planes will feature six of these sleep pods which passengers can pay to rent out for four hour stretches. You can even get food and drinks while enjoying your lay flat experience. (Though I personally can’t imagine using even a minute of my four hours for anything but blissful sleep without a kid’s foot jammed into my face.) It’s true that reality isn’t quite as perfect as my mid-air mattress fantasies. With availability limited, these sleep pods are likely to book up incredibly fast. Regulatory approval on the upgrade is still pending. And at least initially they’re likely to be limited to ultra long-haul flights like the airline’s new 17-hour New York-to-Auckland route. Still, it’s nice to see an airline announcing a change that isn’t focused on some monstrous new idea to squeeze more passengers in planes or more money out of passengers. Air New Zealand is only one carrier changing only some planes and routes, but their decision to upgrade for passenger comfort could conceivably put pressure on other companies to do more to make long-haul economy travel less miserable. “New Zealand’s location puts us in a unique position to lead on the ultra long-haul travel experience,” Air New Zealand CEO Greg Foran commented in a release announcing the upgrade. “It’s going to be a real game changer for the economy travel experience.”The opinions expressed here by Inc.com columnists are their own, not those of Inc.com.

Imposter Syndrome Got You Stuck? Free Yourself by Quitting This Bad Habit

The Yale historian who predicted Trump’s fascist turn foresees Putin’s failure in Ukraine: ‘You pretend to win a war and we pretend to show enthusiasm’