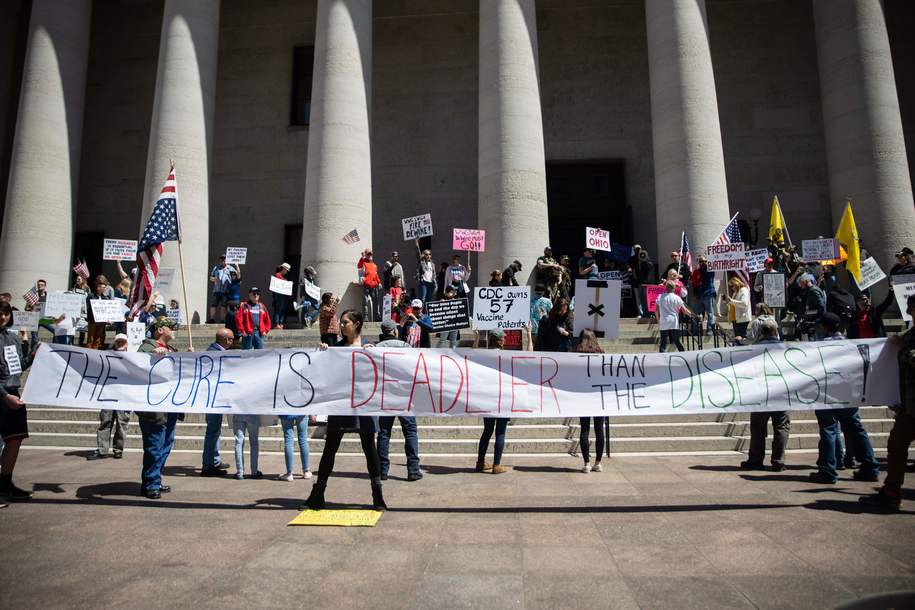 If it’s approved, it isn’t just COVID-19 vaccine mandates that would be affected. The proposed constitutional change would ban government, employers, and health care providers from requiring vaccinations or “discriminating” against those that refuse to get them. The most practical effect would be to erase vaccination requirements from the state’s schools and universities. Right now, children are required to be vaccinated against a host of contagious childhood diseases before they can attend school, because this is a basic f–king public health issue that has been settled for about 200 years now. The constitutional amendment would ban those mandates.

Whether it’s gun violence or the resurgence of diseases that science had long ago conquered, the Ohio message to schoolchildren continues to be “good luck, you’ll need it.”

The question, of course, is whether the proposed constitutional amendment will be approved by voters. Getting nearly half a million signatures to put it on the ballot seems something that the anti-vax community will make happen one way or another, but how willing is the rest of Ohio to enter what is effectively a suicide pact?

And the answer is: Yeah, it could happen. The Ohio Republican Party is absolutely awash with vaccine conspiracy theories and a willingness to wreck public health based on them. Republicans recently passed legislation banning schools from mandating COVID-19 vaccines, and the Ohio House has already passed a bill targeting other vaccine requirements. They’re serious about this.

And that means that it’s more than measles that will be coming back to Ohio schools and universities. It’s also rubella, smallpox, and polio. Public health mandates are designed to achieve “herd immunity” by vaccinating enough of a population that even when an individual person contracts a dangerous virus, that virus has few avenues to spread to others. If those avenues are restored, however—if enough members of the population remain unvaccinated to allow the virus to spread through communities—the disease comes roaring back. People start dying.

Just in case there’s any question over whether the people pushing this have sincere concerns or are just conspiracy crackpots who don’t know a damn thing about vaccines or infectious diseases, the Journal’s story spells things out pretty clearly. The proctologist helping spearhead the referendum is suggesting that it’s the COVID-19 vaccine that’s killing people, not the … damn worldwide pandemic that is in all the damn papers. Another organizer refused to say whether or not she was herself vaccinated, instead referring questioners to the Health Insurance Portability and Accountability Act—a surefire sign of a crackpot. HIPAA says medical providers can’t disclose your medical information without your approval. It does not say that you are not allowed to disclose your own medical information, you stalwart dolt.

Again: Vaccine mandates have not been particularly controversial in a long, long time, likely because they’ve had spectacular success in actually eradicating the diseases they’ve targeted. There was a brief uproar when the HPV vaccine was introduced, but that was because conservative moral scolds were angry that public health officials were attempting to eradicate a sexually transmitted virus when the preferred conservative moral scold approach was that reducing the risk of death would make young women have more sex and maybe those women ought to die as a warning to others.

The only reason anti-vax sentiment is going through the roof now is because an incompetent and lazy Donald Trump didn’t know how to take action in the early days of the COVID-19 pandemic, which caused him to dismiss the severity of the disease that’s now killed over 1 million Americans, which caused him to downplay the need for vaccinations, which turned the whole pandemic battle into a political one in which a bunch of perennially gullible assholes declared that spreading a pandemic disease was their ‘Merican right and the rest of us could go to hell, which led to broad acceptance of conspiracy theories that supposed that secret elites like Bill Gates were putting things into the vaccines that would sap conservatism’s bodily essences because—say it with me, now—it ain’t conservatism unless it revolves around the theory that Not Conservatives are secretly doing things to harm good patriotic racist conservative jackasses in an attempt to keep conservative jackassery under a liberal thumb.

Rather than a success story about how we got a newly emergent disease under control through the power of science, the Republican Party has instead taken the stance that it’s science that has gone bad and it’s time to bring back polio. For “freedom.”

This may start with Ohio rewriting its constitution to prohibit schools from requiring childhood vaccinations before your offspring romps in to lick the classroom doorknobs, but it will end with Donald Trump marketing his own brand of “premium” iron lungs while President For Life Ron DeSantis signs new laws allowing his own supporters to come into your house and vomit on your floor. I don’t have much hope that Ohio voters will put these anti-vax conspiracy cranks in their place; if they did, the Ohio Republican Party wouldn’t exist right now.