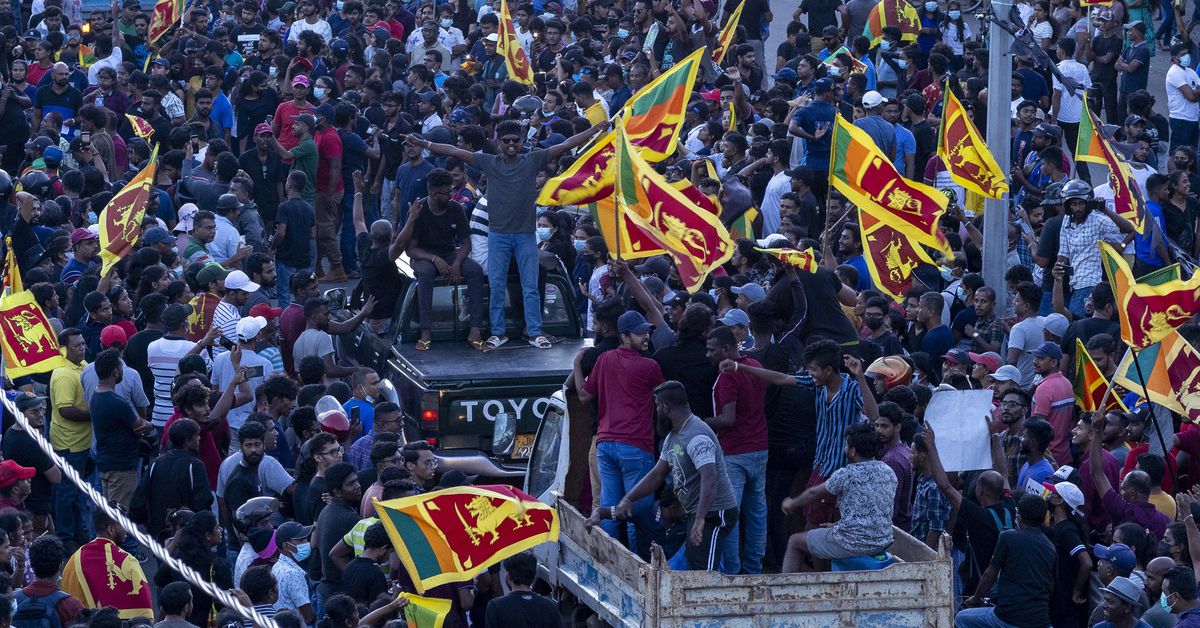 Sri Lanka’s ongoing political and economic crises once again reached a fever pitch as thousands of protesters gathered on Saturday and some stormed the president’s house and offices.

Sri Lanka’s president, Gotabaya Rajapaksa, has apparently agreed to step down July 13, although he has not yet personally confirmed the announcement made by the speaker of parliament, as he is reportedly in hiding. Following the speaker’s announcement, protesters also set fire to Prime Minister Ranil Wickremesinghe’s residence, who also stated he was resigning after just months on the job. Neither he nor Rajapaksa were present when the residences were breached, according to the BBC, and photos show several protesters floating in the president’s outdoor pool.

Rajapaksa, the scion of a Sri Lankan political family, was elected in 2019, and although he didn’t exactly cause the nation’s economic problems, conditions have deteriorated significantly under his leadership; critical shortages of basic necessities like fuel, medicine, and food ignited the protests which have apparently toppled his administration and, for now, the Rajapaksa dynasty.

Wickremesinghe, who joined Rajapaksa’s administration in May after the previous prime minister, Mahinda Rajapaksa — a brother of the current president — resigned the post following violent protests over Sri Lanka’s dire economic circumstances. Sri Lanka has defaulted on payments of its foreign loans— which presently total about $51 billion — for the first time in its history. That’s exacerbating the turmoil that successive crises have caused for the country’s tourism industry in recent years, including a series of attacks on churches in 2019, as well as the ongoing Covid-19 pandemic and Russia’s war in Ukraine.

Although Parliamentary Speaker Mahinda Abeywardena announced Saturday that the president would resign “to ensure a peaceful transition,” that won’t take effect immediately, and further chaos and violence could occur before the July 13 transition date — not to mention the risk that both the president and prime minister could find a way to cling to power in that time.

“Still a ways to go. 4 days is a LONG time in #SriLanka politics,” Alan Keenan, a researcher focusing on Sri Lankan politics at the International Crisis Group, tweeted Saturday.

Sri Lanka’s current crisis is years in the making

The current Rajapaksa administration failed to contain the fallout from recent crises and other long-brewing economic problems, which hampered the government’s ability to supplement its already-dwindling foreign currency reserves. Then, last year, the government banned the import of chemical fertilizer, ostensibly to protect the foreign currency it had on hand; instead, the ban laid waste to the nation’s rice and tea industries, causing the government to spend more importing food than it had saved from the fertilizer ban, Keenan told the Sydney Morning Herald in June. And without the foreign currency that the now-struggling tourism industry used to provide, the government could no longer import the basics that people need to survive.

Those struggles — the church attacks, Covid-19, the gutted tourism industry, low taxes, the fertilizer ban, and, of course, the Russian invasion of Ukraine and attendant fuel crisis — would be more than enough on their own. But the Rajapaksa family’s propensity toward policy failures, corruption, and overly-ambitious infrastructure projects is nothing new, and set in motion the circumstances that brought Sri Lanka’s economy to its knees.

Before there was President Gotabaya Rajapaksa, there was President Mahinda Rajapaksa — the same brother that, until May 9, served as Sri Lanka’s prime minister before protesters chased him out of the job and out of his estate, Temple Trees. Under Mahinda, Sri Lanka took on several costly infrastructure projects including a cricket stadium and the Hambantota International Port. China lent billions to Sri Lanka under Mahinda to finance projects including the port; however, Sri Lanka’s government agreed to allow a Chinese state-run creditor to control a majority stake of the port as part of their debt repayment in 2017.

Now, Gotabaya said in an interview in June, China’s proving less willing to loan to Sri Lanka so the government can import basic goods. “My analysis is that China has shifted their strategic focus into Southeast Asia,” he said at the time. “They see more strategic interest in Philippines, Vietnam and Cambodia, that region, and Africa.” That sentiment, of course denies his own government’s role in China’s waning interest in assisting Sri Lanka, making that reluctance about shifting priorities rather than Gotabaya and his administration failing to meet its creditor’s demands for financial solvency and economic stability.

The president’s refusal to take responsibility for the economic crisis also meant that he delayed requesting assistance from the International Monetary Fund and others to help restructure Sri Lanka’s debts and bail out the country, prolonging the economic crisis — which has now become a political crisis.

Now, with the potential end of the current Rajapaksa administration, it’s unclear exactly how Sri Lanka will emerge from the unprecedented economic crisis it’s currently facing. Talks with the IMF last month, while apparently fruitful, failed to produce a plan to right the economy and put it on a stable path forward; political instability could potentially thwart continuing discussions.

While Both Rajapaksa and Wickremesinghe have agreed to go following a decision by parliament urging them both to resign office effective immediately, they could delay in an attempt to hang on to power. Rajapaksa has allegedly agreed to leave by July 13 and Wickremesinghe hasn’t set a date and there’s not actually a guarantee that they’ll do so, according to Keenan. “All those in power & close to it in #SriLanka, with v few exceptions, care only about playing the angles, buying time, almost never about the public interest,” he tweeted Saturday. “This is why so many demand ‘system change.’”

All those in power & close to it in #SriLanka, with v few exceptions, care only about playing the angles, buying time, almost never about the public interest. This is why so many demand “system change”. https://t.co/MzzRrWbbTQ

De Mel told Al Jazeera English that, “If you look at the prime minister’s history of leadership of his own party, in the last 20 years every time they’ve lost an election — and they have lost many — the prime minister, within his party, has promised to step down, provided there is consensus in the rest of the party ranks about an alternative leader.” Now, de Mel said, Wickremesinghe at least may be trying, “to buy time, and to not actually defer to the enormous call of society and people to resign. So I think it is very clear that it is a tried and tested, cynical tactic that is being presented as an excuse to remain.”

Additionally, the New York Times has reported incidents of state violence against protesters, with 42 people injured after run-ins with state security forces, and four journalists with a Sri Lankan television station attacked outside the prime minister’s residence by security forces. On Saturday. the police had used water cannons and tear gas against protesters, and had reportedly fired shots into the air to attempt to disperse the crowds.

Should Rajapaksa and Wickremesinghe actually end up leaving office, it’s not clear that the Rajapaksa political dynasty will end with Gotabaya. Mahinda’s son, Namal, served in his uncle’s cabinet until this year and still serves in parliament; Basil Rajapaksa, a brother of the president, was the finance minister in his brother’s administration and according to some insiders effectively ran the country during its economic spiral. He resigned his post June 9, but even then, he told reporters, “I cannot and will not step away from politics.”

Brit tourist, 21, dies after being found lifeless in hotel swimming pool in Cyprus on holiday with his parents