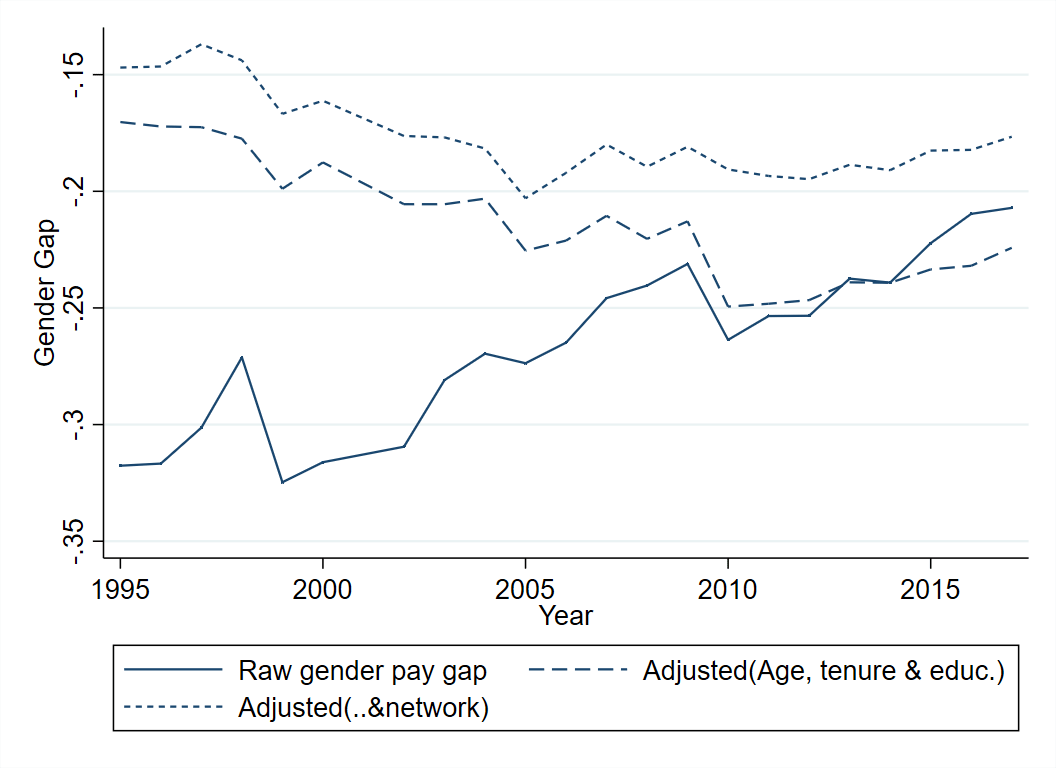 Despite the progress made toward gender equality, men and women still face different labour market conditions at all levels of employment, not least at top management positions. Even female managers successful at breaking the glass ceiling are rewarded less than their male peers. The economics literature has uncovered ample evidence of gender bias. Geiler and Renneboog (2015) find that female top managers in listed UK firms earn some 23% less than their male counterparts, while Bell (2005) documents a bias between 8% and 25% for female executives in US-listed firms, after controlling for differences in company size, occupational title, and industry. Bertrand and Hallock (2001) reveal a 45% gap in US firms, reduced to about 5% after accounting for observable differences, where gender segregation by firm size plays a crucial role.

Gender inequality comes at an economic cost, as shown in Lagarde and Ostry (2018) and Cavalcanti and Tavares (2007, 2015) from a macroeconomic perspective and in Criscuolo et al. (2021) from a firm productivity perspective. Further understanding the pay gap between male and female managers is thus crucial to make substantial progress toward gender equality. It is also essential to facilitate proper legislation design mitigating the difference as analysed in studies such as Djankov and Goldberg (2021) and Bagues and Esteve-Volart (2007). After all, it is likely that the productivity cost of gender discrimination is, if anything, higher as it pertains to managerial positions.

In a recent study (Sazedj and Tavares 2021b), we advance the existing literature on the gender pay gap among top managers by addressing a yet undocumented source of divergence: the difference in professional networks. Using a matched employer-employee dataset with mandatory information on all private firms and wage-earners operating in Portugal between the years 1986 and 2017, we track the entire professional history of a worker and thus compute a measure of networks based on all past professional interactions, within the same firm, namely with co-workers who later become top managers. While in Sazedj and Tavares (2021a), we show that networks indeed play a crucial role in the wage-setting process of top executives, in Sazedj and Tavares (2021b), we address the related and crucial question of assessing how these differences in professional networks contribute to the gender pay gap at the top.

Figure 1 shows how, in 1995, the total pay of female top managers stood only slightly above a mere two thirds of male managers’ pay. That is, for each euro earned by a male manager, a female manager earns 32 cents less. Although the gender pay gap for top managers has narrowed by more than 10 percentage points in the 23-year period of our study, that does not necessarily stem from a decrease in discrimination. By 2017, female pay represented almost four fifths of male wages. However, when we take observable characteristics into account, including age, tenure, and education, and compute an ‘adjusted’ gender pay gap (represented by the dashed line in Figure 1), we find that the catch up in wages of female top managers is solely due to the catching up in skills, with no reduction in the unexplained component of the wage difference, commonly equated with gender discrimination (Cardoso et al. 2016). Our results are in line with the findings of Azamat and Petrongolo (2014), who document that, although the gender gap in education has closed or even reversed in many countries, the gender bias in pay, employment levels, or opportunities has not vanished. Furthermore, when we consider differences in managers´ networks (represented by the dotted line in Figure 1), we find that networks are crucial in explaining a large fraction of the gender pay gap.

Estimating a wage equation with high-dimensional fixed effects and using the Gelbach decomposition method, we can unambiguously decompose the contribution of each source of the observed gender pay gap amongst top managers. Our results are presented in Figure 2. Taking into account the managers’ observable characteristics of age, tenure, and education, which explain approximately 4.1 percentage points of the pay gap, we show how a significant fraction of the remaining gender pay gap is explained by heterogeneity in firms’ compensation policies, as captured by firm fixed effects. In other words, the sorting of managers into firms, where male top managers segregate into firms with more generous pay policies, accounts for almost 7.5 percentage points of the pay gap. Put differently, a random allocation of managers across firms, one such that female managers would no longer be disproportionately allocated to firms with lower compensation, would reduce the gender pay gap at the top by one third. Interestingly, we also estimate that more than 50% of this firm sorting channel derives from differences in networks, as better-connected managers, typically male managers, have access to higher paying firms.

Finally, we find that managers’ unobserved permanent characteristics, captured by manager fixed effects, explain the remaining two thirds of the gender pay gap. These unobserved manager characteristics (unobserved from the researcher’s viewpoint), can be equated both with unobserved skills but also with forms of gender discrimination not associated with sorting of managers across firms.

Figure 2 Decomposing the gender pay gap at the top

Having established the key role of managers’ networks in explaining the gender pay gap among top managers, we further investigate how female managers can best leverage their networks to overcome gender segregation across firms. We examine the role of both network size as well as network gender composition. First, we find no evidence whatsoever of a different role of network size for male and female managers. Yet, and importantly, we do uncover that network gender composition has important and different effects for female and male managers.

Figure 3 The value of gender-specific connections

Note: The dots represent the estimated coefficients from a propensity score matching procedure, while the lines represent the 90% confidence interval. The red/blue figures refer to 3 different regressions run on the sample of female/male top managers. A negative value suggests managers benefit more from female-dominant networks, a positive value the opposite.

We focus on episodes of job transitions and use a propensity score procedure to compare top managers with male-dominant networks to managers with female-dominant networks, after controlling for manager characteristics. We find that, in terms of wage gains, both genders benefit more from male than from female connections (upper panel). However, this result is biased by the fact that most powerful top managers are male. Once we account for the power of the connections – in terms of the size of the firms they manage – we find that female top managers benefit equally from male or female dominated networks, whereas male managers continue to benefit more from male connections (see middle panel). Finally, we consider the depth of the connections by attributing a higher weight to connections with whom one has worked for a longer period and/or in smaller firms, which we consider a proxy for the ‘inner circle’ of the manager. Doing so, we find that both female and male managers benefit most from connections to managers of their own gender. In sum, the closest network connections seem to benefit mostly managers of the same gender. More specifically, female managers can benefit from having close connections with other female managers.

Our results demonstrate how, in a male-dominated corporate world, gender bias may be perpetuated. In light of the existing male over-representation in leadership roles and the bias towards benefiting our peers, the role of female networks for female managers is an important, yet undocumented, fact. Policies that favour increased female presence in leadership positions are likely to have quantifiable and important spillovers, by facilitating the access of more women to top managing jobs. The exact form of those policies – quotas, mentorship programs, or alternatives is an important object of further research.

Azmat, G and B Petrongolo (2014), “Gender and the labour market: Evidence from experiments”, VoxEU.org, 7 June.

Criscuolo, C, P Gal, T Leidecker and G Nicoletti (2021), “The human side of productivity: Uncovering the role of skills and diversity for firm productivity”, VoxEU.org, 23 December.

Sazedj, S and J Tavares (2021b), “The Gender Gap at the Top: How Network Size and Composition Impact CEO Pay”, CEPR Discussion Paper 16761.