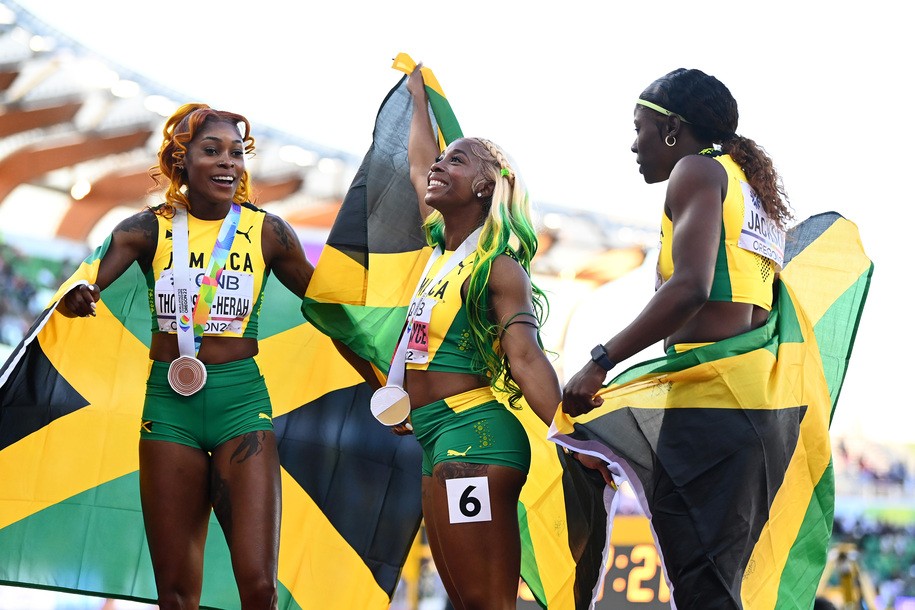 Ever since I was a kid, I’ve loved track and field competitions, courtesy of an uncle who used to take us to the Penn Relays in Philadelphia. It was there I first watched women run track live. Like many other track fans, I thrilled watching the sprints and the relays. Among my sprint sheroes were Wilma Rudolph, Gail Deevers, and Florence Griffith-Joyner, aka Flo-Jo.

Over the years much of the competition in the sprint races has been between U.S. teams and Team Jamaica—which you can see at the Relays. I’ll admit that when they competed against each other I cheered on Team U.S.A. I’m not sure just when my perspective shifted. Though continuing to root for “us,” I became interested in how an island nation of slightly under 3 million people was training and turning out so many superb runners. I became a fan.

The YouTube channel Track & Field Nation attempts to answer that question in this report, produced after the 2021 Olympics, attributing the Jamaican success to two factors: the ability to draw from a field that isn’t pulled off by other sports, and to the coaching at the MVP Track Club by co-founder Stephen “Franno” Francis.

This year we got to watch total dominance in the 100-meter finals by Fraser-Price, Jackson, and Thompson-Herah, who are each profiled in this video report.

Fraser-Pryce, 35, is one of the most accomplished sprinters of all time, and her success is particularly remarkable because of her longevity. Her career took off with Olympic gold in the 100 in 2008. She has won five of the last seven world titles, and stands as the only person to win more than three in the 100. The closest person to her world championship gold medal count at that distance is Usain Bolt with three. Fraser-Pryce’s world title count might have been greater, but she gave birth just after the 2017 world championships to her son, Zyon, in an emergency cesarean section.

“There were days I did think about whether my body would be able to allow me to put the level of work in to get it done,” Fraser-Pryce told the Telegraph in 2019.

Shelly-Ann Fraser-Pryce took the whole of the 2017 season off as she gave birth to her son Zyon.

Since her return to the track, she’s set personal bests over 100m and 200m and become Olympic relay and double 100m world champion. pic.twitter.com/OAPdexHQA2

For those of you who haven’t been introduced to her, Track & Field Nation has a comprehensive documentary of her career on the track:

After Fraser-Pryce’s victory, I was elated to see this congratulatory tweet from track and field champion Allyson Felix, our most decorated U.S. track star, who is retiring after this season. That’s sportswomanship!

Join me in the comments section for updates and more, and for the weekly Caribbean news roundup.

Dumping the queen and the British colonial legacy