US stocks suffered their biggest decline in two months on Monday, with technology shares falling sharply on the gloomy economic outlook and concerns that members of the Federal Reserve will adopt a hawkish tone at a symposium this week.

Wall Street’s benchmark S&P 500 index slid 2.1 per cent, its most severe one-day fall since mid-June. There were declines across every sector, but tech stocks and cyclical consumer groups including Amazon and Tesla were the worst hit. The tech-dominated Nasdaq Composite index fell 2.5 per cent.

Tech stocks that promise long-term growth are seen as particularly vulnerable to rising interest rates because higher rates reduce the relative value of earnings far in the future.

“The Nasdaq is the epicentre of interest rate uncertainty in the stock market,” said Julian Howard, lead investment director at GAM. “[The Fed] is talking up hawkishness, which is making the market quite nervous. The job isn’t done [on inflation].”

The Fed has already lifted interest rates three times this year in a bid to bring down inflation from 40-year highs, but officials have stressed the US central bank has further to go.

Although Monday’s stock market declines appeared to contrast with a strong rally in the third quarter, investors have warned that the earlier gains were not evidence of an increase in investor optimism after a dreadful start to the year.

“I’m not buying into this relief rally. I think we’re in for more downside for risk markets for the rest of the year,” said Jamie Niven, a senior fund manager at Candriam.

Joost van Leenders, senior investment strategist at Van Lanschot Kempen, predicted Powell “[will] justify why they are raising rates so fast and why they have to”.

The hawkish predictions were reflected in government bond markets, with the yield on the policy-sensitive 2-year Treasury note rising 0.06 percentage points to 3.32 per cent. The 2-year yield has risen from less than 1 per cent at the end of last year, and was at about 2.5 per cent as recently as late May. The yield on the benchmark 10-year note rose above 3 per cent for the first time in a month. 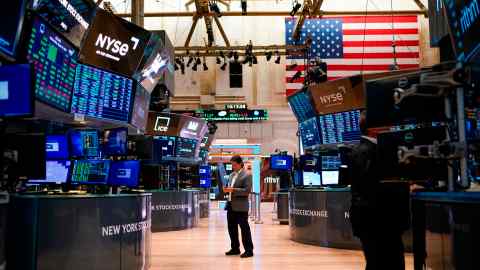 Higher yields reflect lower prices, and traders on Monday said they saw a flurry of put option buying on Treasury futures — wagers that the value of the futures would fall.

John Brady, managing director at futures brokerage RJ O’Brien, said the bearish bets, including many that expire on Friday, were being executed to guard against a potential further Treasury market sell-off following the Jackson Hole summit.

In currency markets, the euro dropped 0.9 per cent against the dollar to $0.994, slipping back below $1 for the second time this summer. It had hit parity with the greenback in July for the first time in two decades.

Worries over possible Russian energy supply cuts led European gas and power prices to surge on Monday, adding to fears that the continent could slip into recession.

The regional Stoxx Europe 600 equity gauge closed 1 per cent lower, with Germany’s Dax down 2.3 per cent.

The dollar index, which tracks the US currency against a basket of peers and tends to rise during periods of uncertainty, gained 0.7 per cent. The index has risen almost 3 per cent this month, returning close to the two-decade high it reached in July.

On Monday, mainland China shares bounced after the People’s Bank of China slashed its mortgage lending rate for the second time this year in an effort to support its debt-laden real estate sector.