AN elderly man who kept a wild kangaroo as a pet has died after the beast savaged him at his Western Australia home.

The 77-year-old man was discovered by a family member after being attacked by the murderous marsupial.

Emergency services rushed to the pensioners home in Albany, Australia, but the furious kangaroo prevented paramedics from entering the property.

Unable to make it into the home, paramedics were forced to call police to the residence.

The kangaroo was shot dead at the scene by police as authorities believed the angry marsupial was posing a threat to the emergency responders.

Police believe the man was keeping the wild kangaroo as a pet before the beast killed him in the grisly attack. 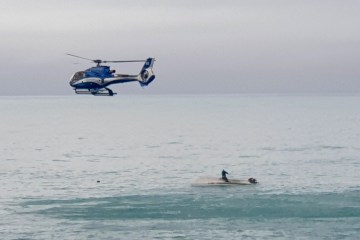 A WA police spokesperson said on Monday: “The kangaroo was posing an ongoing threat to emergency responders and the attending officers were required to euthanize the kangaroo by firearm

“It is believed the man had been attacked by the kangaroo earlier in the day.”

Although kangaroo attacks are not uncommon in Australia, the 77-year-old’s death was the nation’s first reported fatal kangaroo killing in nearly 100 years.

The last person to lose their life in a kangaroo attack was 38-year-old William Cruickshank, who suffered a broken jaw and extensive head injuries after a run-in with one of the animals back in 1936.

Numerous clashes with the marsupials have been documented over the years, with the beasts possessing frightening fighting abilities.

Kangaroos can spring over 6ft in the air and travel at 35 mph, and have a one-punch knockout that has been captured on camera in incredible footage.

Mitchell Robinson was decked by a feisty kangaroo in his own front yard in New South Wales, Australia back in 2020 – with experts believing he got off lucky.

Featherdale Wildlife Park zookeeper Chad Staples said: “They have huge claws on their front hands that they will use to hold on with and then their back legs are all power for kicking, so they are covered with weapons.”

Melbourne woman Debbie Urquhart came face to face with one of the creatures after stepping out on a morning run in 2017.

The personal trainer said the kangaroo repeatedly kicked her on the right side of her body, ripped her clothes and “threw me around like a rag doll.”

The 54-year-old even played dead in an effort to stop the attack, and was left needing emergency surgery.

How the Government Is Failing Americans Uprooted by Natural Disaster